Well, a modified middy. And I LOVE it. My hair was nearly to my waist, limp and shapeless, and I hadn’t had a hair cut in 6 months. It was taking me an hour to curl, and it felt like it took as long to comb. I felt buried. I was extremely close to hacking it off myself. So I made the appointment.
I had studied the middy a fair amount, and looked at a crap load of pictures. It’s a little hard to find pictures of it unstyled, but I landed on a good one, where the length of the layers were modified to be longer and less awkward so that the cut didn’t need to be curled to look right. I took this picture, a picture of the same girl with her hair styled, and a picture of Lauren Bacall, along with a mental list of instructions with me to Tonic. 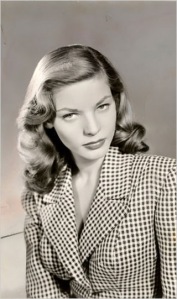 My stylist, Becky, didn’t know what a middy was, as far as I could tell. But she followed my instructions to the letter. Split ends gone, a U-shaped hemline, and lots of box layers with no texturing or feathering. My length rose to the bra line at the back up to just barely past my shoulders at the front. The result was a cut that looks very modern when left straight, elegant when softly curled, even surprisingly high class and professional, but that when set in curlers looks authentically forties or fifties. It’s a beautiful and very cool cut. Becky is awesome. I think I might even go shorter next time. 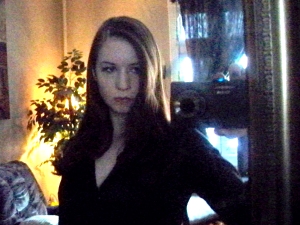 My hair as styled by Becky, and a horrible display of photographic skill.

In fact, the way she styled it, trying to imitate the picture of Lauren Bacall but using modern tools that didn’t quite do the job, was so sleek and elegant that I liked it even more than my own big fluffy “Hollywood” style of curling it. 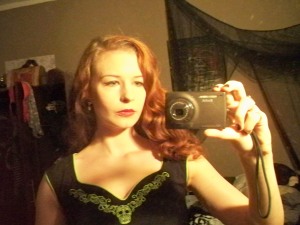 My hair before, “Hollywood” style, before it has a chance to collapse under its own weight.

I wanted to recreate this, but punched up with a little more vintage. It didn’t take long to figure out how. My usual set was too curly, and just a curling iron wasn’t curly enough, and too time consuming. So I ended up doing 8-10 big curls instead of 15-20 little ones, radiating outward from the crown, with the thin side of the part smoothed out with the curling iron used like a flat iron. It took 10 minutes to curl instead of an hour, half an hour to dry instead of five hours, and barely a minute to smooth out. Perfect. As far as a perfectly vintage look, I finally got it down, and I love it enough to share. Tutorial to follow in the next article.

Perfect vintage hair, minutes before static and bad quality hair spray ruins it. I’m working on that too.

So if anybody in Winnipeg wants a stylist who will listen to them and give them a great do, go see Becky at Tonic!
Now, there is something that I failed to mention in my curling tutorial, and that’s about setting lotion. Setting lotion is a product that will make your hair fuller and keep the curl for longer. The most popular kind is Lottabody, and you dilute it in water. I’ve heard of different ratios, 1/5, 1/3, 1/2. You’ll have to figure out what works best for you based on your hair type. If it’s too thick it won’t spray out properly and your hair won’t curl. But the stuff does wonders. Alternatively you can use mousse or spray gel. Don’t use hair  spray until AFTER you’ve finished styling though, or it will be too stiff to work with.
So there’s my little update. I’m learning a lot more about styling lately too so when I can get my thoughts on that in order I’ll be posting another. See you soon!